Today I’d actually visit the show of Lamb of God in 013 Tilburg with Children of Bodom and Sylosis after work. After working a lot to save up some money this evening was the first one after Australia I was really looking forward to. Unfortunately due to the attacks in Paris (in particular the Bataclan during the Eagles of Death Metal show) and the stress and risks that came with it the bands decided to cancel the show shortly before the doors would be opened. These would already open earlier because of extra security measures. 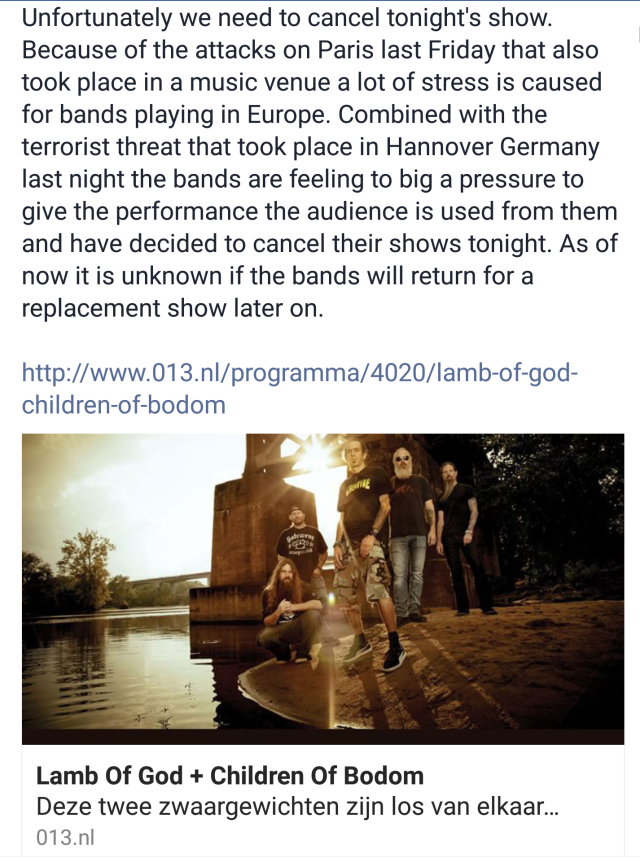 I’m all for not being scared and go on with life as you would like to lead it and that it’s possible to let the shows go on as I’ve seen happening with Marilyn Manson, The Shining, Black Label Society, Five Finger Death Punch and The Prodigy, but I cannot deny I understand the worries around the current events. Artists are.. Oh hey, people who can experience stress like us too.
So fans, you can be angry, you can be disappointed, you can find from it what you like, but at least try to understand the motivation behind their choices for one of their reasons was YOUR safety as I read from someone who spoke with the drummer of Lamb of God.
You have no idea what costs they make cancelling this show, they were ready to go, they probably/maybe had good reason to cancel shortly before. Even though I also think we shouldn’t be led by fear, better safe than sorry is no weird motivation. It’s one out of love.
The first to be taken to safety would be the artists and they thought about: what about our audience?
Whatever choice they would have made, it would have never pleased everyone and both ones would have been hard to make anyway.
For those kicking the ass of the promotor, the decision of the bands was not in their hands. They had the unfortunate responsibility to inform the audience. Don’t kill the messenger.

What do you think of bands canceling their shows or tours during this time?
Should they proceed or not, and why?

Hello I do unboxing for box only💜📦☑️ #

6 years of my Mo's Wanderlist blog already! and al

Yaww that eggo ain't runny. But other than that, t

Tonight it be fresh tomato soup, 🐱 some surpris

For the remainder of the day, my butt is gonna be

All is peachy at the beachy 🤪 @thebrianuniverse

Happy moment! Getting things right with your body

Ughh my fav pasta in the world 😍 gimme! Gimme!

A beluga 🐋has surfaced at the beach. Ah, no, th

At Emily and the cool kids ☕☕🍪 #nicefrance

A grey and drowsy day call for bananabread I'd say