So here’s my update on yesterday. Woke up early for a 2h workout at the gym and then went off to the food festival I mentioned thursday, which I will tell you about. After the festival I visited my friends band practise and ended the evening at her place watching World War Z and some oldschool Blade!
I went to all these places with my bicycle (37,1 KM) so I believe I’ve had more than enough exercise to burn the calories I ate at the food festival.

So, this Food Truck festival TREK! It didn’t turn out to be what Yinling and I expected, but it was a succesful day! The weather was great, we had fun and both tried some food we had never eaten before. For me it also means I can ‘stripe’ something off my bucket list. Since it falls within eating delicacy I’m not really striping it off. There’s much more I’d like to try!
So why wasn’t the festival the way we had hoped for? The foods served were very safe and plain snacks (not that we didn’t enjoy them), no real culinairy delights. 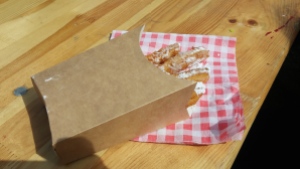 Though we did found one we needed to try: oysters!
BUT! We saved the best for last and started with some churros to fill our tummy’s after our bicycle tour. Yummie! 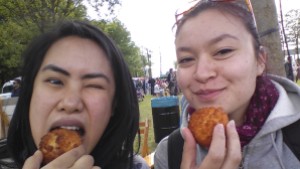 Oh, after every snack we took this nice little break in the sun to prepare ourself for the next bite. Very, very important :p ! Still in the mood for sweet flavours I was drawn to the truck with cocos balls. Hmm.. They had different flavours like plain, with raisins, white chocolate and dark chocolate. We both picked the one with white chocolate and it was delicious. I love cocos and I love chocolate, so what was not to love! Since it very easy to make I’m probably going to make them myself some time too. 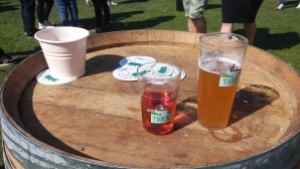 Ofcourse after these it was time for a little break again, this time with a rosé wine and a cold beer. With the logo on the cups we also had ourself some nice souvenirs to take home. A good day may be remembered, right? 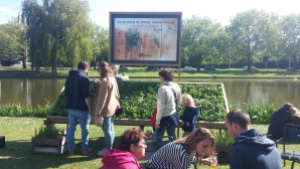 When we were stretching our stomachs I noticed the pizza stand behind us.
I like the idea of picking your own veggies and spices at the stand next
to it.
Now I had tasted some sweet snacks I was in for something else and tried something Yinling had tried before the cocos balls. So my second last dish was a sourdough bread cone sandwich with meatballs, onion chutney and arugula from Coonbroodje. Tasted really nice! 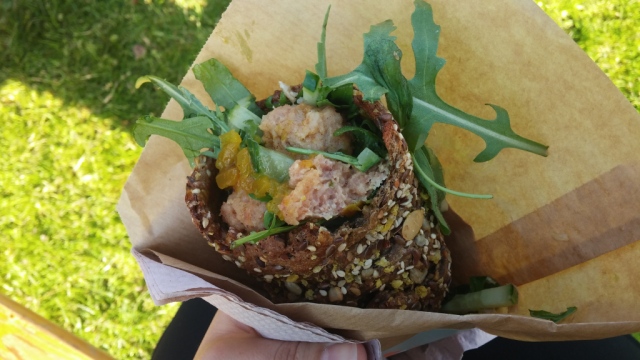 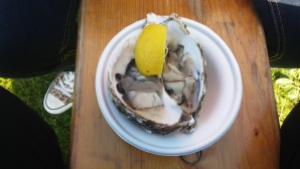 DUM, DUM, DUM.. Like I said, we saved the best for last. I had to go to the band practise of my friend, so it was finally time for those oysters. They are cut open and served with lemon juice. It looks like snot and we wondered if we could keep it in, because someone at the festival told us he had tried it once before and it was like he had swallowed a sip of seawater. Well, that happened to me before and it made me a bit nauseous, but after all it wasn’t that bad at all! We both think it’s actually something you can learn to eat. Finally here’s the video we shot when we tried the oysters!

See you #ontheblog or until I (n)ever(?) change my